This model addresses the question of why regeneration efficiently reproduces the correct body plan in Planaria. It postulates that a gap junction (GJ) enabled memory mechanism amplifies and therefore stabilizes the representation of the anterior-posterior (A-P) axis in a specific population of cells, for example, the cells of the ventral nerve cord (VNC). This cellular memory of the A-P axis replaces stoichiometric competition between head- and tail-specific regeneration pathways with essentially 100% probabilties for correctly-oriented regeneration following a wound.

Disrupting GJ function by an inhibitor such as 8OH disrupts the cell-level memory of the A-P axis. In this case, head- and tail-specific regeneration pathways compete in response to a wound. The probabilities of head and tail regeneration then depend on the stoichiometry of their respective activators and/or inhibitors.

The model assumes that all cells in the modelled population are competant to either execute, or induce in surrounding neoblasts, both head and tail regeneration pathways. These pathways are assumed to be coupled by Vmem-dependent mutual inhibition as shown below. Both pathways are assumed to have inactive, potentiated but not fully activated, and fully activated states. The head and tail pathways are quantitatively potentiated by head (H) and tail (T) factors, respectively. It is consistent with the model that H is implemented by anterior depolarization, i.e. that [H] = Vmem. Once potentiated, either pathway can be fully activated by a wound signal that is assumed to be independent of wound site. Head or tail pathway activation is assumed to require a characteristic time τH or τT, respectively, with τH < τT. A GJ-dependent "Don't Make Head" (DMH) signal both potentiates the head pathway and strongly inhibits its full activation; it also assures regeneration of a non-depolarized tail. Completed regeneration of either a head or a tail inactivates the respective regeneration pathway. 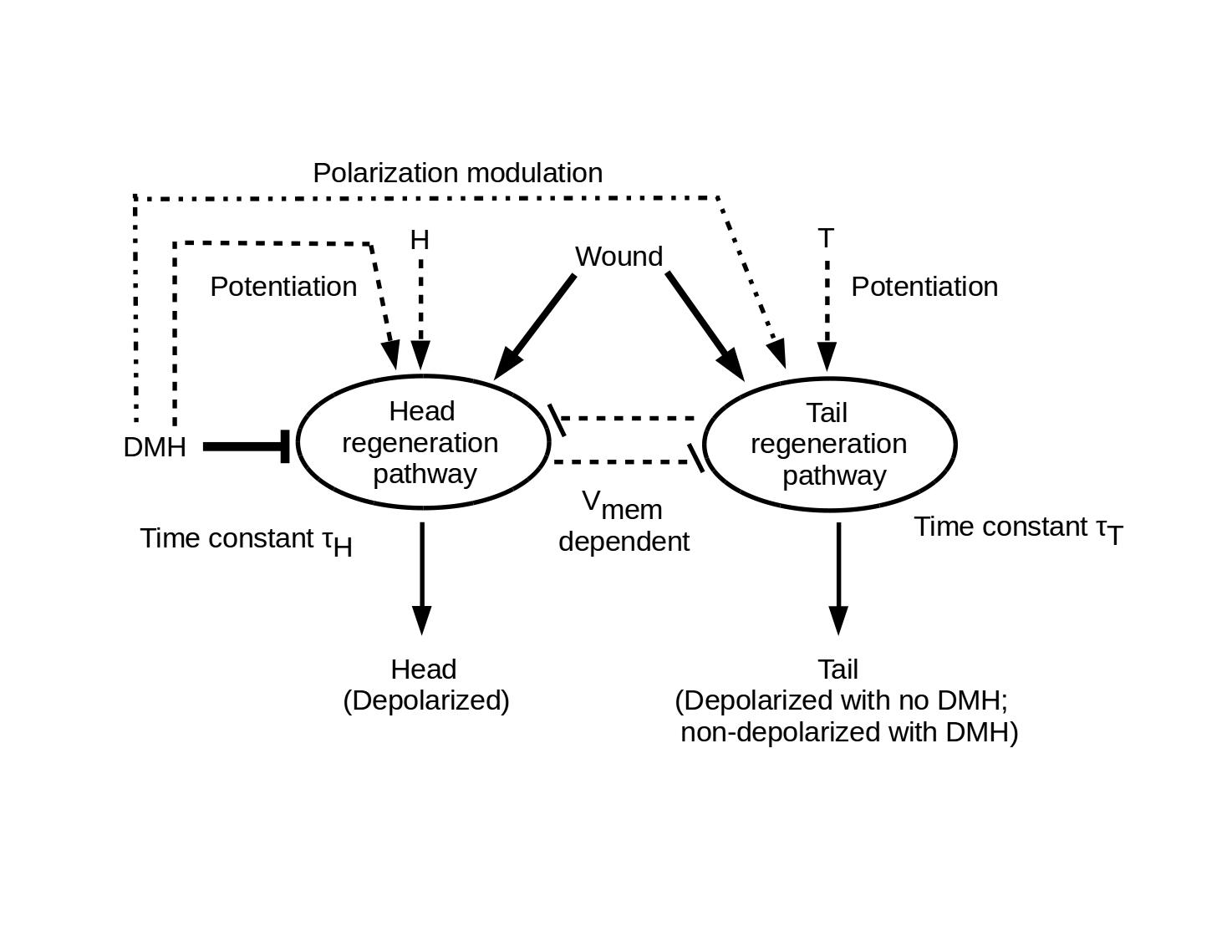 The model assumes that the DMH is transmitted in the A-to-P direction. Each responding cell receives DMH from its anterior neighbor and transmits DMH to its posterior neighbor. This transmission process is GJ and Vmem dependent. DMH is only effective if detected at the anterior surface of the receiving cells. The effective strength of DMH as an inhibitor of head-pathway activation is proportional to the concentration [H].

The model represents experiments in which both the head and tail of a planarian are amputated, leaving a remnant trunk fragment. Following the amputations, the remnant trunk is allowed to regenerate either in water or in 8OH. The model has two parameters that can be set interactively. The parameter τ8OH / τH is the ratio between the time delay τ8OH between an amputation and exposure of the amputated fragment to 8OH and the time τH required for activation of the head pathway, which is assumed to also be the time constant for head-pathway deactivation by DMH. The model assumes that potentiation of the head pathway by DMH and H combined is sufficient to balance potentiation of the tail pathway by T wherever [H] < [T]. The posterior cut position is also an adjustable parameter.

In the diagrams below, downward arrows represent experiments in which both anterior and posterior structures are amputated and the remnant trunk section allowed to regenerate. Model predictions are given as percentages for normal, double-tail or double-head morphology as outcomes. Observed percentages are also shown. Parameter values can be adjusted to change the predicted outcomes.