This model examines the dynamics of stem cells (Planarian neoblasts) that are allowed to reproduce and migrate within a morphologically complex animal. Distinct neoblast lineages are assumed to respond differently to large-scale morphological signals and to compete; the model examines the conditions under which such differential responsiveness to signals and inter-lineage competition is compatible with neoblast population stability or leads to chaos, runaway inter-lineage competition and cell death. The structure and behavior of the model are described in more detail below.

The model depicts a two-dimensional array of "cells" representing small voxels of a planarian body. Each cell is occupied by neoblasts with lineages indicated by a particular color.


Color labels for neoblast lineages; grey (center) is an equal mixture of lineages.

Click "Reset" below to generate a new random start state.


Set probability (0% - 100%) for one long-range migration of progeny from each cell.

The 40 X 30 cell grid shown has toroidal topology: cells along the top and bottom borders are neighbors, and cells on the left and right borders are neighbors. This topology gives every cell four abutting neighbors. Note that the word "cell" here is used to indicate a grid cell in the model, not a biological stem cell. The term "neoblast" is used for stem cells.

Each cell is initialized to a random mixture of neoblast lineages, indicated by a random mixture of red, green and blue color. On each time step, each cell calculates the difference between its mixture of lineages and the average mixture of its neighbors, and adjust its mixture toward the average of its neighbors by 1/4 of this difference (i.e. the nearest-neighbor convergence rate = 0.25). This convergence to uniformity models low-level, unbiased competition between lineages located in a single morphological region. The averaging process is inhibited if one of a cell's neighbors has one pure lineage and another of its neighbors has a different pure lineage. This inhibition creates a mixed-lineage boundary between regions with different pure lineages.

"Initiate random migrations" adds, with the probability specified (default = 10%), one long range migration of progeny from a "source" cell to a "target" cell located at least the specified Euclidean distance from the source cell. Long-range migrations are only made if both source and target cells have the same dominant lineage, i.e. R, G, B, C, M or Y. It is assumed that progeny of the dominant lineage are the ones that migrate, and that migration reflects an increase in local competitive fitness. 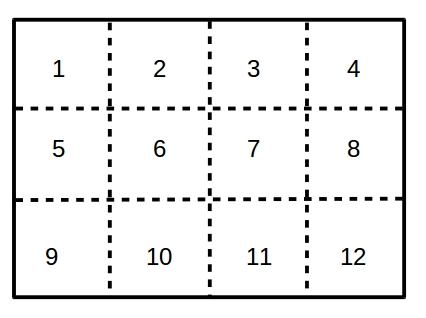 "Impose survival biases" enhances competitive advantage (default = 2x) of long-range migrants between particular 10 x 10 cell regions. The biases favor Red - Cyan - Red - Cyan in the top third of the grid, Green - Magenta - Green - Magenta in the middle third and Blue - Yellow - Blue - Yellow in the lower third. Migrants of all other lineages are disfavored by the same factor in each region. These biases model differences in compatibility between neoblast lineages and morphological regions, e.g. ability to correctly interpret region-specific morphological signals.

Copyright © 2016, 2017 Chris Fields
Non-commercial re-use permitted; please cite:
C. Fields and M. Levin
Are planaria individuals? What regenerative biology is telling us about the nature of multicellularity.
In review.